We know what works, we need capacity now.

The Ofsted report, Safeguarding children and young people in education from knife crime (2019), based on research carried out in 29 schools, colleges and pupil referral units (PRUs) in London was published yesterday. Recognising that no one agency can solve knife crime, the research details findings and recommendations based on the following questions:

Sadly, the findings and recommendations of this report are no revelation. In essence they focus on the usual suspects- that all practitioners, regardless of agency, are key to reducing crime and abuse by:

However, whilst caution should be maintained as to the study’s transferability across England (the study sample is small and is London centric - a city supported by a bespoke violence reduction unit not in place in most other cities) there is one key element of the report worthy of focus, particularly as we are in the midst of transferring LSCB duties to local area tri-partnership arrangements, namely Recommendation 1:

In my opinion, this recommendation emphasises and strengthens the need for all educational settings within Tri-partnership localities to be designated as named partners. (Tri-partnerships consist of 3 safeguarding partners: Local authorities, Clinical Commissioning Groups and Chief Officers of Police).

The information schools, academies, PRUs and colleges hold is crucial if we are to truly understand what is happening at a local level and best inform local strategies. Unlike any other, educational settings have the most frequent regular contact with children, young people and their families and, as the report highlights, we must develop better ways to access and use this intelligence.

This all sounds infinitely sensible, and dare I say somewhat familiar, but here’s the rub- resources. As a former strategy manager for school improvement I know how passionately Head Teachers, Principals and their SLTs feel about improving the outcomes for all children and young people and, given the opportunity, always value ways to help make a difference. I don’t doubt that for a second. But in thinking just how this strategic collaboration might work effectively, particularly with core educational roles being stretched to capacity, I fear we may face similar problems currently experienced in other services who feel seriously under resourced and underfunded.

For example, this week Chief Constable Sara Thornton (CBE QPM Chair of National Police Chiefs Council) gave evidence to the Home Affairs Select Committee inquiry on serious violence, which included a focus on knife crime. The Chief Constable reported to the committee on the findings following the second summit of Chief Constables and the Home Secretary.

In her evidence to the committee it was clear that strategically, the Police know what tactics work, where hotspots exist, how County Lines exacerbate the problem and the impact organised crime has on serious violence. The restriction in effectively doing this, described by Thornton as “suppressing the violence now”, is one of capacity.

In her statement “we (the Police) can’t arrest our way out it it”, Thornton highlighted that violent crime is not solely a policing problem. In acknowledging the vulnerability of excluded / off rolled pupils, children in care or who are homeless becoming involved in violent crime she, like this Ofsted report, recognises the need for better collaborative strategic approaches.

But like education, policing faces similar problems. Staff shortages, with many having left policing, has placed stress and strain on core policing. Even the 970M funding increase pledged for 2020 will not replace the officers who have left the force. In responding to serious incidents e.g. the response to the recent fatal knife crimes in Birmingham, Chief Constables are faced with transferring resources in a model Thornton described as “robbing Peter to pay Paul” i.e. in essence there is no capacity to carry out the core work when police officers are drafted elsewhere.

In the education world this has a familiar resonance. There is no slack capacity in teaching or supporting pupils. Most staff have multiple roles within their organisation as the norm. Gone are the days of supply staff budgets to release staff for external commitments.

In summary, whilst the focus of this Ofsted report is useful in directing an overarching strategic lead, it does little to contribute to the dilemma that has existed for many years now- how to effectively make these overarching targets a reality in practice without substantial investment and new models of collaborative working. The report states it is produced to highlight areas of practice for further consideration by central government, local government and school leaders. I’m not convinced they are telling them anything they didn’t already know and as Chief Constable Thornton said “we know what works, we need capacity now”. 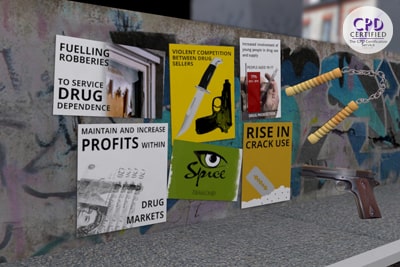